One of the main parameters that both ball and roller bearings must comply with in most of the applications is the respect of stringent requisite of noise generation during rotation.

It is evident the growing need of users not to be disturbed by noisy air conditioners and washing machines or annoying car alternators and electric motors, just to make few examples. In addition to that, the development and forecasted spread of electric traction solution in the cars of future will further enhance the market request for very silent bearings: the background noise of current combustion engines will disappear and automatically the sound requirements of bearings will be enhanced further.

It’s a fact that quitness is a key selling point that often helps clinch sales. That’s why the biggest bearings multinational companies have been increasing their efforts in putting on the market silent bearings, each one claiming to offer the best product of the market. Low dB, Gen C, Q44 and other internal nomenclature of bearings quality classes have been defined accordingly.

To measure in accurate way the bearing noise under rotation during their manufacturing process is a key activity particularly in the production of medium, small and ultra-small deep groove ball bearings. However by itself it is not any more sufficient. Indeed, in the last years  it has become fundamental to provide to manufacturing teams on-line and off-line tools to understand the different causes that may generate the bearing vibration/noise, in order to allow the production techniciansto take on the spot corrective and improvement actions in their process. This capability in bearings noise analysis has become the real distinguishing element between a standard bearings noise equipment and a superior class one.

The various types of vibration and sound in rolling bearings can be grouped in four main categories: structural, manufacturing, handling and other. The structural vibration consists mostly of race, click, squeal and cage noise: it can be continuous or intermittent depending on specific cases. The manufacturing vibration is instead related to the waviness noise generated by the geometrical imperfections of inner and outer ring and of rolling elements, being always continuous in nature. The so-called handling vibration is normally associated with flaw and contamination and is generating – in most of the cases – irregular noise. Then there are other types of vibrabition that include noise generated by sealing and lubricant (irregular) or by runout (continuous).

The magnitude of structural sound or vibration is partially related to the manufacturing process. When sound is generated, in most cases vibration occurs, and when vibration occurs, usually sound is generated. For instance, when vibration is caused by waviness, it is assumed that at the same time a “waviness” sound is generated. While vibration and sound almost always accompany each other, problems of vibration and sound are usually charachterized in terms of one or the other. This is because the ability or inability of humans to hear or sense the vibration depends on frequency. Low-frequency sound is barely audible while high-frequency vibration cannot be perceived by human ear. For this reason problems at low frequency are “vibration problems” and those at high frequency are “noise problems”. As a rule of thumb, the arbitrary border separating vibration problems from noise problems is 1000 Hz. In other words, below 1000 Hz is considered to be vibration and above 1000 Hz is sound or noise.

Race noise is the most basic sound in rolling bearings. It is generated in all bearings and is a smooth and continuous sound: its magnitude is used to assess bearing quality. The race noise is around 1/100 of the magnitude of normal conversation and the energy associated with it is very limited. Its main characteristics are:

a)      The frequency of the sound doesn’t change even when rotational speed changes (its frequency is the natural one of the raceways rings);

b)      The faster the running speed, the louder the sound;

c)       If radial clearance is reduced, the sound becomes louder;

d)      If the lubricant viscosity is higher, the sound is reduced;

e)      The higher the rigidity of the housing, the lower the magnitude of the sound.

Race noise is considered to be caused by waviness which occurs even when the most advanced machining technology is used to process the surfaces of the raceways and of rolling elements of a bearing. Due to this waviness, the contact between the raceways rings and rolling elements behaves like a spring that fluctuates minutely during bearing operation. The vibration of this so-called spring acts as an excitation force on the rings of the bearing: consequently vibration and race noise are generated.

Click noise tends to occur more often in relatively large bearings under radial loads and at low speeds. In condition of radial load, in fact, a load zone and no-load zone exist inside the bearing. The bearing has some clearance in the no-zone load, due to the fact that rolling elements do not touch the inner ring, while they touch the outer ring due to the fact that the centrifugal force generated by the rotation “pushes” the rolling elements against it. However, when the centrifugal force is lower than gravity due to low rotation speed, the rolling elements fall and collide with the cage and/or the inner ring. It is such collision who generates click noise.

Squeal noise is a metallic sound similar to metal sliding on metal. It tends to occur with relatively large bearings used under a radial load, especially in cylindrical roller bearings, but sometimes also in ball bearings. It seems due to the friction between the outer ring and the rolling elements, but it is not clear if this contact is happening in the load zone or in the no-load zone. The characteristics of squeal noise are:

Cage noise is determined by the collision of cage with rolling elements or with rings. It is generated in any type of bearing and its magnitude is usually not very high: it can be further reduced in some extent by reducing the mounting error. Its characteristics are:

In addition to the noise described above, the bearing cage can also generate a kind of “croaking frog” sound at low frequency, due to self-induced vibration of the cage caused by sliding friction between the cage guide face and the bearing component that guides the cage. Such noise can become loud and therefore problematic.

Many studies have been done in order to correlate the waviness errors on the bearing components with the frequencies of noise on the finished bearings, in such a way to determine the correlation between such defects and to have a powerful tool to find out any manufacturing issues on rings or on rolling elements or on cage. This is made possibly by the usage of time domain, enveloping techniques, narrow-band frequency analyses, Fourier Transformation (FT), spectrum mask and special digital filtering methods.

Despite the reliability of such algorithms is not yet equal to 100%, the statistical data that can be got through the on-line analysys of produced bearings in a manufacturing line will allow to have a good understanding of any criticality in the process, making possible the technicians corrections on the up-stream operations.

Rings and rolling elements of a bearing have a harder surface than 60 HRC, so relatively tough. However, if a bearing is dropped or otherwise sustains a shock, dents can result on the finished surfaces of its components. Furthermore, even minute contamination can cause noise problems. Such events generate what is called handling noise.

When a flaw such as a dent or rust exists on a finished raceways surface of a rolling bearing, then a pulsating, machine-gun-like noise is generated when the bearing rotates. Such noise is caused by the rolling elements hitting the flaw on the raceway surface and is called flaw noise. Its frequency is the same of race noice. When flaw noise is generated, the level of the entire frequency spectrum rises. As a result, analyzing the frequency simply by Fast Fourier Transformation (see box) is not sufficient to distinguish it from other noises.

Flaw noise has unique generation cycles or intervals when compared to other types of noise. At a constant speed, the noise generation cycle is constant, but as the speed decreases, the noise generation cycle becomes longer. Such cycle is determined by speed and by the internal specifications of the bearing. It also changes with the position of the flaw on the bearing. Due to this characteristic, it is possible to determine whether flaws exists and, if so, where they are located. This is possible through a method called envelope analysis.

Seal and lubricant noises are generally classified as other types of noise. The seal noise is due to a self-induced vibration caused by friction between the seals and seal contact points. The lubricant noise is instead generated when lubricant or lubricant bubbles are crushed between the rolling elements and the raceways. Their generation is irregular and ceases as running time elapses.

Finally, run-out noise (also considered in the class of other types of noise) is caused by an unbalanced shaft or uneven thickness of the inner ring. The frequency of this vibration is the same as the rotation frequency.

Through the cooperation with its own partners, the Pinerolo’s company ICT (www.consulting-trading.com) has developed sophisticated equipment to measure – both in line and off-line – the frequency spectrum of ball and roller bearings noise through a velocity (micron/sec) sensor and – by special algoritms – to compare the actual noise results with calculated natural frequency of rings, cages, rolling elements and grease. The very special envelope method allows ICT machinery to determine any irregular flaws noise and to identify the position where the relative dent is located. Measurement is done in velocity, which is the best method to have an optimal view of vibration results in the frequency range from 50 to 10000 Hz, ensuring a better and more complete detectability respect to other methods based on displacement (micron) or acceleration (micron/sec2).

For above reasons the bearing noise tester and analyzer proposed by ICT is an essential equipment for the bearings manufacturers and laboratories. For more info, get in touch with info@consulting-trading.com. 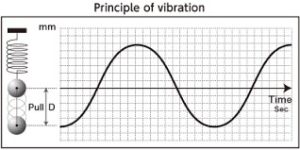 The principle of vibration and the parallel with spring. 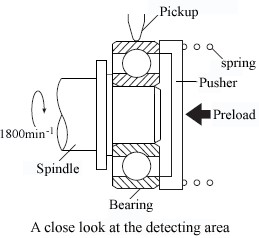 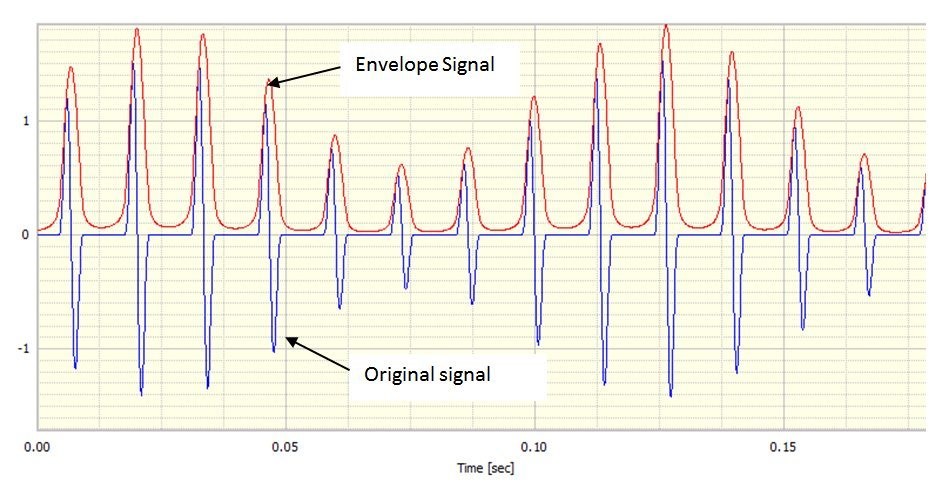 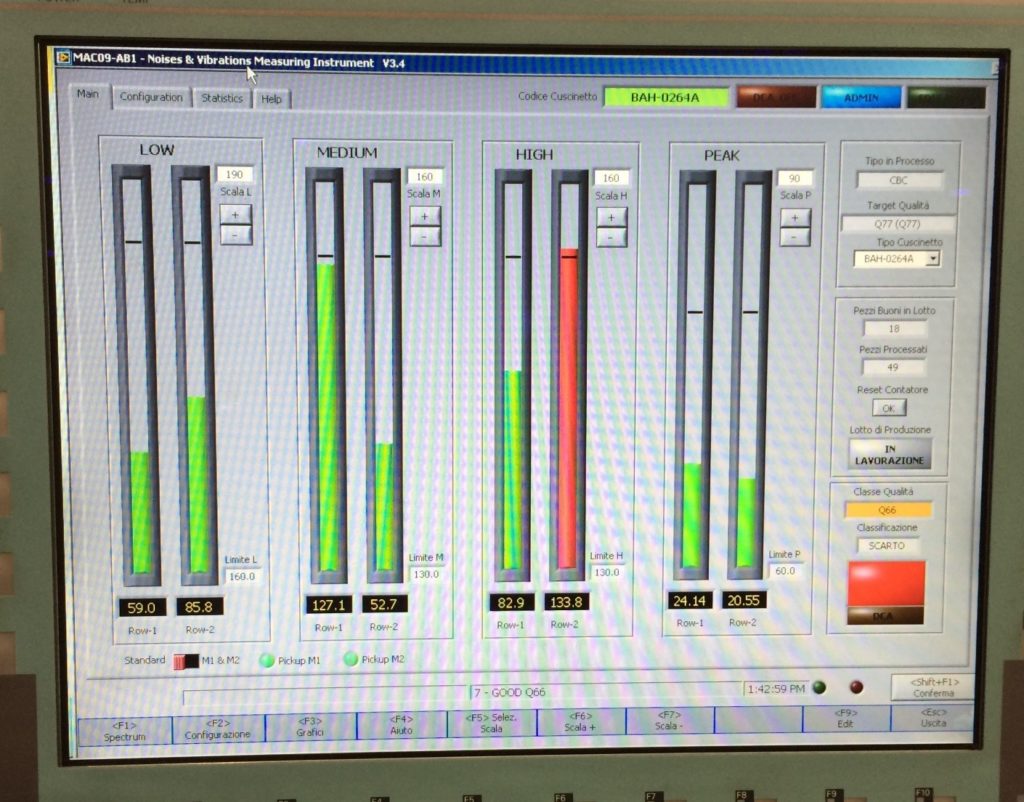